Welcome to The Episcopal Church!

The Free Church of Saint John is an Episcopal Mission in the Kensington neighborhood of North Philadelphia. This neighborhood is home to a large population of Irish Americans, Hispanic Americans, mainly Puerto Ricans and Dominicans, African Americans, Italian Americans, and Polish Americans. The mission is celebrating its 150th year of ministry. 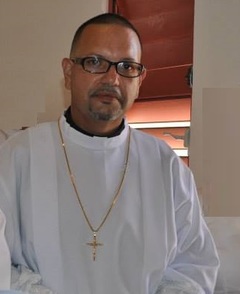 The word “Episcopal” comes from the Greek word that is usually translated “bishop” and points to the church’s understanding that a bishop is the primary shepherd of the church. Under the Episcopal form of government, the bishop’s authority is equal to that of the Apostles and follows a line of succession by the laying on of hands in ordination. Priests come under the authority of the bishops and are responsible for the teaching and administration of the local churches. Throughout the history of the ECUSA, their doctrine and practice have been generally in line with that of the Anglican Church.
What Do Episcopalians Believe?
We believe there is One God who creates all things, redeems us from sin and death and renews us as the Children of God. As Episcopalians we promise to follow Jesus Christ as our Savior and Lord. We believe the mission of our church is restoration of all people to unity with God and each other in Christ.
To read more about the service, creeds, sacraments, and other beliefs, please click here.
The above information was gathered from Episconet. You are invited to copy this material and modify it without further approval. Please give credit to Episconet. Thank you.
PLEASE NOTE THAT THIS PAGE IS UNDER CONSTRUCTION LAST UPDATE MAY 31, 2018 BY REV. FR. DAVID FRANCESCHI